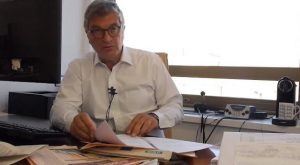 Trump is doing everything he can to improve American commercial trade. Don’t forget, America is at the top of the world. He is even eager to use one of his favorite weapon, the greenback !There will be a currency war, because Trump is trying, with some of his obsessions, the trade imbalance, but he does not understand that in terms of production, The USA has less industrialized products to export, and we are in a real globalized trade world. For the moment, Trump believes that there is a trade imbalance, he also believes that all the other countries have used the USA to increase their own economic growth, and that the USA were cheated upon, so first, he wants to break all the multilateral agreements and create new bilateral deals which will definitely be more favorable for the US, but all this hasn’t been a real success yet, especially if we look at the situation with Mexico, with a new deal which looks very much like the previous agreement… Then, we have the customs duties with China and Germany within the Euro area, but the exportation taxes don’t seem to be as efficient as he thought they would be.So now, his latest idea is the dollar. He has been told that when we devalue a currency, then comes the competitive devaluation, which was true for Japan and China, years ago, and at the time, these two countries were strong industrialized countries which exported a lot…In certain occasions, the government can and may decide to sell the dollar in order to make the other currencies go up (in the 1980, to slow down the rise of the dollar for example) it was not the central banks but the US Treasury which decided to act. But I think, Trump is ready for it, he is ready for a new currency trade war, I think that Trump is going to trigger off a currency war with a domino effect. Needless to say how dangerous all this is, not to mention all the terrible consequences. This is a major mistake !